My good and longtime friend Scott tweeted this:

If I read 1 more evangelical tweet about claiming my purpose, speaking into destiny or seizing my passion I will punch someone in the teeth

I do not disagree with him, though our mechanisms for dealing with the phenomenon differ.  Nevertheless, I – no stranger to evangelical literature – recognized the similarity in form many evangelical “self-help” books follow.  I commented on such in a public forum, and another friend, Deb, suggested a handy chart.  So, for all you pastor/preacher types who struggle with the right book to write, I give you the Title-O-Matic – simply choose a verb, a pronoun, and a noun.  Instant Wal-Mart success! 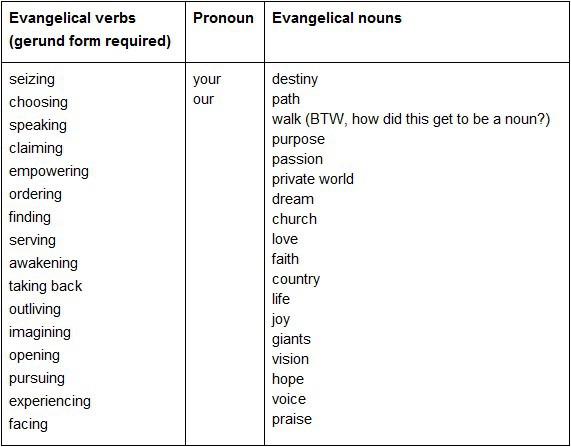 from “Preacher Performance and “The Peter Principle” (link)

Technique Five: Convergent Specialization: Finding himself incompetent to carry out his duties, the convergent specialist will ignore most of them, and Concentrate his attention and efforts on one small task that he can do. If he finds himself incompetent to do the job, he specializes further till he reaches a level of competence. Historians become the foremost authority on the first thirty minutes of the reformation. Academicans who are incompetent to understand the meaning and value of a literary work may write a lengthy treatise on “A Comparative Study Of The Use Of The Comma In The Literary Works Of Otto Scribbler.” Preachers often specialize in writing reactionary articles about what other preachers said, or spend their times publishing books that nobody reads.