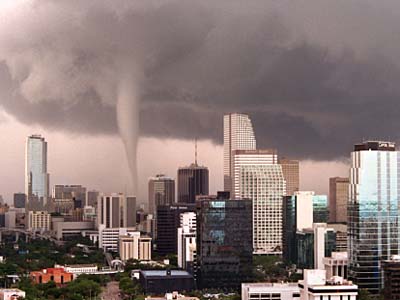 I’m watching the news as a tsunami generated by a magnitude 8.8 earthquake has just impacted Chile.  One cannot “prepare” for an earthquake itself – our science isn’t that good yet.  But we can prepare for the effects of the earthquake, and the situations that will invariably arise afterward.

Yesterday, there was a 7.0 in Japan (Okinawa), and a 5.2 followed.  While these were small in comparison to today’s, they were both still thrust-fault earthquakes (located along a subduction zone).  These terms probably mean nearly nothing to anyone else; I have acquired a geek-level interest in disaster geology, and have become quite knowledgeable regarding earthquakes and volcanoes.  The point of that knowledge, however, is understanding what they do to the planet, and subsequently what they do to the people living around them.  I am amazed that people do not understand the planet they live on.  I was watching a live Twitter feed, and the comments that were coming through were laughable:

Not safe to live anywhere…

This raises the question: What is the plan in case of emergency for Americans living in Okinawa?

Holy cow Earth, give us a break.

No, in the planetary scheme of things, it ISN’T safe to live anywhere.  The moment you start thinking it is, you start preparing yourself to become a victim.  “Not again?”  Does this person think that earthquakes are just going to go away?  Our living planet, despite its potential to kill us at any moment, keeps us all alive for the very same reasons.  Plate tectonics has been churning since a planet crashed into ours over four billion years ago, and has been renewing Earth and making a (mostly-) hospitable place for us to live.  Fortunately, the Earth does “give us a break” between calamities.  That’s why we prepare.  And for the “plan in case of emergency for Americans living in Okinawa?”  Your safety is YOUR responsibility.  Rely on the government or charitable agencies and you will become the kind of statistic we experienced after Katrina.  Fortunately, Tweets of wisdom came through as well.  This from the Portland Office of Emergency Management:

Magnitude 7 EQ off of Okinawa, Japan is a good reminder to prepare with your family. Start by talking, then make a plan & get supplies

Perfect rule for life in general.  How many people make fun of the Boy Scouts’ motto: Be Prepared?  What’s the first thing that soldiers do upon enlistment? Basic training.  With events in our recent history like 9/11 and Katrina, Americans have no excuse for not being prepared.  We learned how to “shelter in place” during the Anthrax attacks and dirty bomb scares.  And every single thing we learned is a basic rule of life – we even have a name for one of the rules: the Rule of Three.

Humans likely will not survive more than three minutes without air.

Humans likely will not survive more than thirty minutes submerged in cold water.

Humans likely will not survive more than three days without water.

Humans likely will not survive more than three weeks without food.

Humans likely will not survive more than three months without personable human contact.

The government has helped, in a lot of ways.  Ready.gov is actually a great site to start learning.  Your state’s (and city’s) Office of Emergency Management will have very good info on what to do (and the threats you face) in your area.  But as I said above: your safety and well-being is up to you.  There is a sobering truism in emergency situations – it is likely that someone is going to die.   There are a host of ways that you can minimize the risk of that someone being you.

A program on the History channel, After Armageddon, details in a very graphic and chilling fashion what would happen after a real global pandemic (hemorrhagic fever).  Worth watching, but don’t watch if you’re not ready to start planning.

A final quote from the Portland OEM:

The nation’s infrastructure is in poor shape even before disaster strikes. How long can you live w/out water, power?