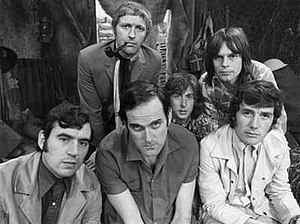 Forty years ago, a seemingly ragtag bunch of comedic writers and performers got together and formed what would be one of the most seminal troupes of comedy history.  They would face pressure from their own network to tape over their work as a cost-cutting measure, abandon the notion of a “punchline” nearly altogether, and ultimately struggle with personality issues, even through the production of several major-release movies.  Monty Python redefined what “British Comedy” would become known for – intelligent wit that one had better process quickly to avoid missing the next line.

For me, the most important thing about Monty Python was the BBC program “Monty Python’s Flying Circus.”  It came on PBS in the eighties, and I was hooked.  I began learning vast sections of it, committing much to memory.  Several friends appreciated the often subtle humor as well, and very often, even during high-school classes, the riffs would begin winging.  My input on several class productions was influenced heavily by the show, including a parody of “The Outsiders” we did in our senior year.  In German class, we were required to take on a traditionally German name – I had chosen Reinhardt, who later in the year gained the last name Gambolputty de von Ausfern-schplenden schlitter crasscrenbon- fried-digger-dangle-dungle-burstein-von-knacker- thrasher-apple-banger-horowitz-ticolensic-grander-knotty-spelltinkle-grandlich-grumblemeyer -spelterwasser-kürstlich-himbleeisen-bahnwagen-gutenabend-bitte-eine-nürnburger-bratwustle -gerspurten-mit-zweimache-luber-hundsfut-gumberaber-schönendanker-kalbsfleisch-mittler- raucher-von Hauptkopft of Ulm (taken from a sketch), which I could quote at will.  I even put it on my name badge when we went to the Foreign Language Competition in Ft. Smith (on a busfahrt, but that was an entirely different joke).  Ultimately, the show talked about religion, politics, philosophy, history, art, music, theater, and science, and was completely irreverent about each one of them.  It was no wonder that I was going to get so hooked on it.  You had to be smart enough to get the joke.  And quick, because there was no self-appreciating moment that Second City, SNL, and other American comedy is so well-known for (tell the joke, then wait while everybody laughs at it).

So, who were these ne’er-do-wells that comprised this group?  So many American comedians were the kind that dropped out of college (or even high school), started their comedy routines on the street, or perhaps grew up in and out of clubs like the Improv.  How did these absolutely loony Brits come by their skill?

Each of them graduated.  In addition, Graham Chapman actually certified as an M.D., though never went into practice.  Now, granted, they were all in collegiate groups that helped them hone their comedic talent.  But comedy like this, that reaches back and yanks stuff from the pages of academia – that’s comedy.  It was always the perfect blend of thinking and silly.

So, to them, thanks, and happy 40th Anniversary of the founding of Monty Python.  May your cats be confused, your larches be recognized, and your mints be wafer-thin.